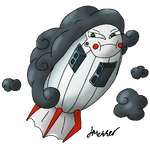 Zephloa is a Electric/Flying-type. It evolves from Cumuloft at level <level>. It is <height> in height, it weighs <weight>, and has the ability <ability>. In the Dawn Pokédex, its number is #042, and it is classified as the <Classification> Pokémon.

Zephloa is a large Pokémon that looks like a blimp. Its entire top half is shrouded in grey storm clouds. On the front, it appears to wear a white mask, though it is actually its face. Its rudder is red and white.

- Zephloas name has float in it, and its pre-evolutions name, Cumuloft, has aloft in it. Float and aloft are anagrams.

Zephloa is based on a blimp and storm clouds. It was designed by Fiery Hedgehog.

Zephloas name is a combination of Zephyr, or Zeppelin, and Float.

Retrieved from "https://pokemondawn.fandom.com/wiki/Zephloa_(Pok%C3%A9mon)?oldid=4287"
Community content is available under CC-BY-SA unless otherwise noted.