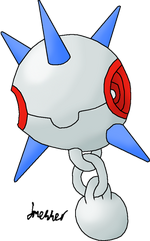 Valode is a Water/steel-type. It evolves into Marinode at level <level>. It is <height> in height, it weighs <weight>, and has the ability <ability>. In the Dawn Pokédex, its number is #028, and it is classified as the <Classification> Pokémon.

Valode is a metallic naval mine Pokémon. It has six blue spikes protruding from it, which act as sensors. It has a red band around its back, which ends in two circular indents on either side, which contain its metallic eyes. It has a chain attached to the bottom side, which is then linked to a spherical weight.

- Valodes original name was Mineme, a combination of mine and me (目, Japanese for eye). It was changed due to pronunciation problems.

Valode is based on a naval mine. It was designed by Fiery Hedgehog.

Valodes name is a combination of naval and explode.

Retrieved from "https://pokemondawn.fandom.com/wiki/Valode_(Pok%C3%A9mon)?oldid=4273"
Community content is available under CC-BY-SA unless otherwise noted.